Some big ideas in optimisation were developed during and soon after the second world war. The new field came to be known as Linear Programming.

Significant contributors to it were Leonid Kantorovich in 1939 and George Dantzig in 1946 and 1947. Initially, the Linear Programming formulation had mainly military applications but it is now recognised as a tool with many commercial uses to do with finding the best ways to allocate available resources.

In this chapter, we consider some simple examples.

Suppose a manufacturer can make two kinds of product and there is a strong demand for both types. The profit that can be made on the first type is $\$50$$50 per unit and on the second type, it is $\$40$$40 for each unit. Clearly, the total profit $P$P depends on the numbers of the two types of product that are produced and the unit profit on each product. We express this algebraically as

where $m$m and $n$n are the respective numbers of the two products.

To maximise the objective function in the case we are considering, it might seem that the correct course of action is to produce as many as possible of the more profitable product and none of the other type. But, usually, there will be constraints of various kinds that restrict what can actually be done and which make some combination of the two products a better option.

For example, suppose the work is done in $7$7-hour shifts. It takes $27$27 minutes to produce each unit of the more profitable product, and it takes $19$19 minutes to make each unit of the other type. At the end of the shift, there are to be no partially completed units.

A simple calculation shows that it would be possible to complete, at most, $15$15 of the more profitable product but there would be $15$15 minutes left unused in the shift. Perhaps it would be better to produce just $14$14 of this type, leaving $42$42 minutes remaining in the shift which could be used for making $2$2 units of the second type.

Clearly, the second option is better.

The numbers of the two products produced are each at least zero. So, we can write $m\ge0$m≥0 and $n\ge0$n≥0 as two further constraints.

Other constraints will arise due to limited supplies of raw materials, labour, transport or other factors.

As a result, only a certain set of values for the variables $m$m and $n$n is possible. On a graph, this set appears as an area bounded by lines. This region of possible values is a convex polygonal shape, usually called the feasible region. Any point whose coordinates $(m,n)$(m,n) lie outside the feasible region is said to be infeasible.

We might calculate the value of the objective function for the points $(m,n)$(m,n) in the feasible region, looking for the optimal solution. This would take a very long time were it not for the fact that

the optimal solution is always at a vertex of the feasible region.

Thus, the problem reduces to that of finding the intersections of the lines forming the boundary of the feasible region and then testing those points by substitution into the objective function.

The steps to be carried out in the optimisation process are:
• Define the variables.
• Construct the objective function.
• Write the constraints in the form of a system of linear inequalities.
• Draw the graphs.
• Find the vertices of the feasible region.
• Test for the optimum vertex, and write a conclusion.

The graph of these inequalities looks as follows: 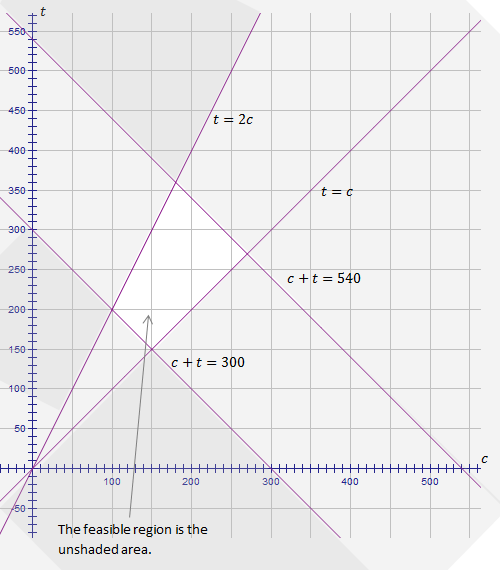 To find the vertices of the feasible region we consider the intersecting boundary lines in pairs.

We now substitute each vertex point into the objective function $P=19c+16t$P=19c+16t to find the maximum value for $P$P.

Oliver is opening a new cross-state shipping company. He has the option to buy semi-trailer trucks or box trucks. To help in his decision, Oliver analyzed the following data: