So far we know that surds only like to combine and split when multiplication and division are involved and not addition and subtraction. This gives us a lot of freedom when multiplying and dividing more complicated surds.

We can also use grouping for division. 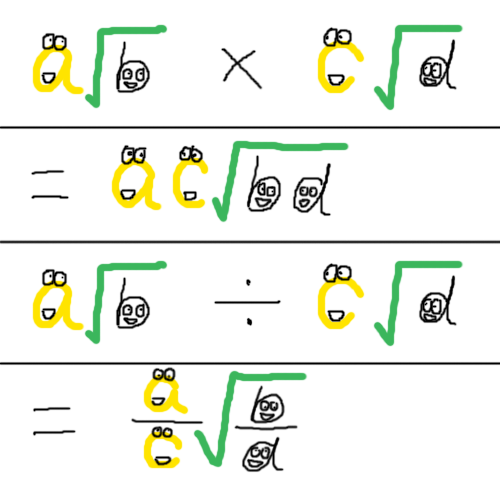 What have you noticed with both these examples? Yes that's right, we group all the numbers together and the surds in another group and work them out separately, then combine them to get our answer.

Although simplifying surds before attempting the question is not necessary here like it is with addition and subtraction, it can still help us get the job done quicker sometimes. Let's have a look at an example that might give you a surprising solution.

$\sqrt{7}$√7 cannot be simplified so our question becomes

This is very interesting as we started out with a problem involving surds that ended in an answer without surds! Can you think of any other examples like this?

Apply the algebra of complex numbers in solving problems