An exponential function is the appropriate model to use when a quantity is increasing or decreasing at a rate that depends on the quantity present.

In a biological experiment, a sample of a microorganism was seen to double in size by cell division every $11$11 minutes.

We can work out how many cells there will be after several $11$11-minute periods by a step-by-step calculation if we know how many cells were present initially. Suppose there were $n$n cells present at the beginning of the experiment.

The researcher observes that the increase occurs gradually and not in sudden bursts at the end of each $11$11 minutes. The number of minutes that have elapsed since the beginning of the experiment is $m=11k$m=11k. So, it seems reasonable to put $k=\frac{m}{11}$k=m11​ and write down a formula that will give the number of cells $N$N after $m$m minutes, for any number of minutes, not just multiples of $11$11. This is

Suppose there were $5$5 cells present at the beginning of the experiment and the growth of the microorganism was observed for $100$100 minutes. How many cells would there be at the end of this time?

A certain radioactive isotope decays in such a way that after $175$175 years only half of the original quantity of the isotope remains.

Thus, we arrive at a formula for the amount remaining after $y$y years:

The total number of reactions after $t$t seconds is given by the equation $y=4^t$y=4t.

In a knockout mixed martial arts tournament, the winner of each round progresses to the next round until there are only two players left.

The diagram shows the draw for the final, semi-final and quarter final rounds. 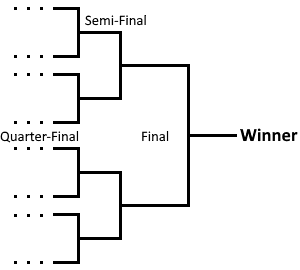