Perimeter of Circles and Sectors

We have already see how to work out the length or distance around the outside of polygons (shapes with straight sides).  Remember it was called perimeter, go here and here for a review.  The perimeter of a circle has a special name, it's called a circumference.

You have probably heard of a special number in mathematics called Pi, it has the symbol $\pi$π. But what exactly is it?

Well Pi is a special number that represents the relationship between any circle's circumference and its diameter.

Let's explore how many diameters fit around the circumference of a circle by using the applet below.

You would have found that that the length of the circumference was always 3 and a bit diameters.  In fact, this value is ALWAYS the same, and we call this constant Pi.

The number Pi is irrational (and so the decimals go on and on forever), that's why we use the symbol $\pi$π.

Because Pi is irrational, any calculation we do on a calculator with Pi in its decimal form will be an estimate.  A pretty close one, but still not what we would call exact.

It doesn't matter what the diameter is the relationship between the circumference and diameter is always the same.

The circumference of a circle can be calculated with a special formula.

To find the formula for the circumference of a circle we will rearrange the ratio we used to find pi  $\pi=\frac{C}{d}$π=Cd​ to make $C$C the subject.

Circumference of a circle

and because the diameter is twice the radius, we can also write the rule as

What if we don't have an entire circle?

More generally, If the angle of the sector is $\theta$θ, then the fraction of the circle is represented by

Think: What fraction is this sector of a whole circle?  What is the rule for circumference? What other lengths do I have to include in the perimeter? 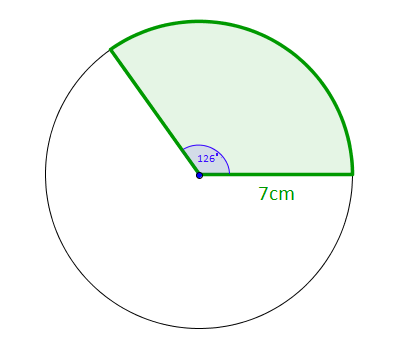 Circumference of a whole circle is $C=2\pi r$C=2πr, so the circumference component of the sector is

The perimeter is the distance around the outside of the shape, so the perimeter needs to also include the two straight edges (the two radii) of length $7$7cm.

If the radius of a circle equals $27$27 cm, find its circumference correct to one decimal place.

Calculate the total perimeter of the following figure, correct to 1 decimal place.

Apply trigonometric relationships, including the sine and cosine rules, in two and three dimensions