Given a vector with magnitude $r$r and direction $\theta$θ we can write it as an ordered pair as follows:

This, the addition and subtraction laws and the dot product are all useful in solving problems involving displacement, velocity and force vectors.

Vectors can be applied in displacement problems including those involving bearings.

Think: This problem can be solved using the sine and cosine rules in trigonometry but we will use a vector approach.

Do: A useful first step is to draw a diagram of the situation. The diagram below represents the problem as it might appear on a map. 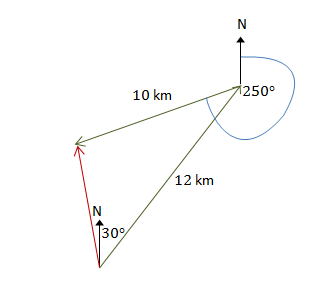 This diagram shows the displacements as vectors in coordinate form: 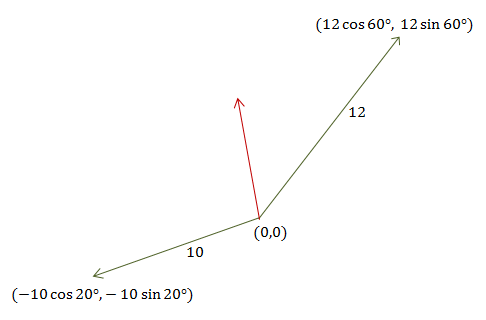 We used some simple trigonometry to obtain the coordinates of the displacement vectors. The resultant vector, in red, is the sum of the two displacements. Its coordinate representation is:

This vector has length:

The bearing angle of the red arrow is:

Applications involving velocity also lend themselves to vector calculations. For example, in the area of air transport, where headwinds can play a large role in the direction of flight and fuel consumption, accurate calculation of the velocity and bearing to reach a destination is required.

A river flows at the rate of $0.5$0.5 m/s. A swimmer starting from the river bank aims at the opposite side and maintains a speed of $1.26$1.26 m/s in a direction perpendicular to the flow of the river. What is the swimmer's velocity (magnitude and direction) relative to the river bank?

Think: The swimmer will be swept downstream. The vector representing the swimmer's motion will be the sum of vectors represting the velcoty of the river current and the swimmer.

Adding these two vectors gives the resultant velocity of the swimmer:

The magnitude of this vector is:

The angle of the motion from the riverbank is:

Kenneth wants to fly his plane due north at $410$410 km/h relative to the ground. If a $80$80 km/h wind is blowing from the north-west, what velocity in the air should he fly his plane?

Give your answer in terms of the unit vectors $i$i and $j$j, where north corresponds to the positive $y$y direction.

In physics and engineering in particular, vectors play an important role in the resolution of multiple forces into a single resultant force, the calculation of forces taking into account friction and other physical phenomena or the dividing of a force into directional components.

An important concept to understand is force equilibrium. Force equilibrium dictates that for a body at rest, with external forces applied, the sum of these forces in all directions must equal zero if the body is at rest or a constant velocity.

Think: We understand the direction angle to be the angle measured anticlockwise from the positive horizontal axis. Hence, we can draw the following diagram: 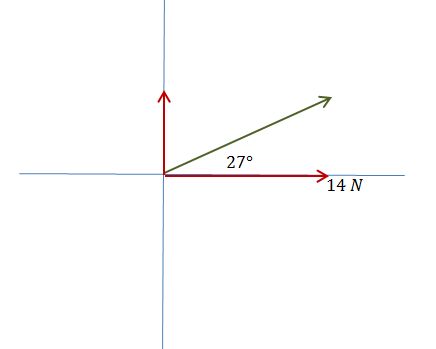 Do: The vector $\mathbf{v}$v, coloured green above, has magnitude related to the given information by:

Then by Pythagoras, the vertical component has magnitude:

A $20$20 kg mass is suspended on a chain $A$A attached to a ceiling timber. This means that there is a tension force of $20\times9.8$20×9.8 N in the chain when it is hanging vertically (if we ignore the weight of the chain).

Suppose the $20$20 kg mass is pulled horizontally by another chain $B$B until the chain attached to the ceiling is at an angle of $20^\circ$20° from the vertical. Has the tension in chain $A$A increased?

What are the tension forces in the two chains?

Think: A diagram of the situation is drawn below. 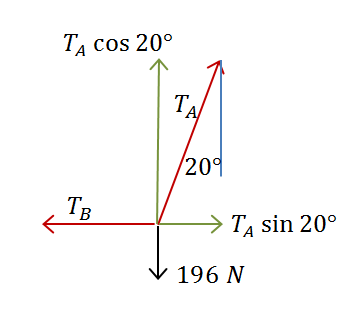 We can form two equations:

From the first of these we find:

We have taken the downward weight force to be positive. So, this tension force acts upward.

Then, from the second equation, we obtain:

Give your answer to the nearest Newton.

An object with a mass of $7$7 kg is on a ramp that is inclined at $27^\circ$27°. It is held at rest by two rectangular components: a force $P$P perpendicular to the ramp and a friction force $F$F parallel to the ramp.