Time series data is a type of bivariate data, so it would be useful if we could use the data to make predictions using a linear regression model or line of best fit. However the peaks and troughs make it difficult to see the underlying trend in the data. In order to predict using a least-squares regression line we must smooth the data first.

In this course we have two methods of smoothing the data:

When we say we want to smooth the data, we mean that we remove the peaks and troughs so that we are able to see the underlying trend of the data more clearly.

One method we can use to smooth the data is to calculate the moving averages of the response variable ($y$y) and then plot this against time ($t$t). A linear regression model can then be applied to the soothed set of data and used to analyse underlying trends.

As the name suggests, moving averages are averages of rolling sets of data. The moving average method calculates the average of a set number of points around the given data point and then the moving average is plotted against time. This lowers the peaks and raises the troughs, hence smoothing the original data.

Calculate the missing values of $x$x and $y$y in the table.

Consider the graph below displaying the data from the table above. 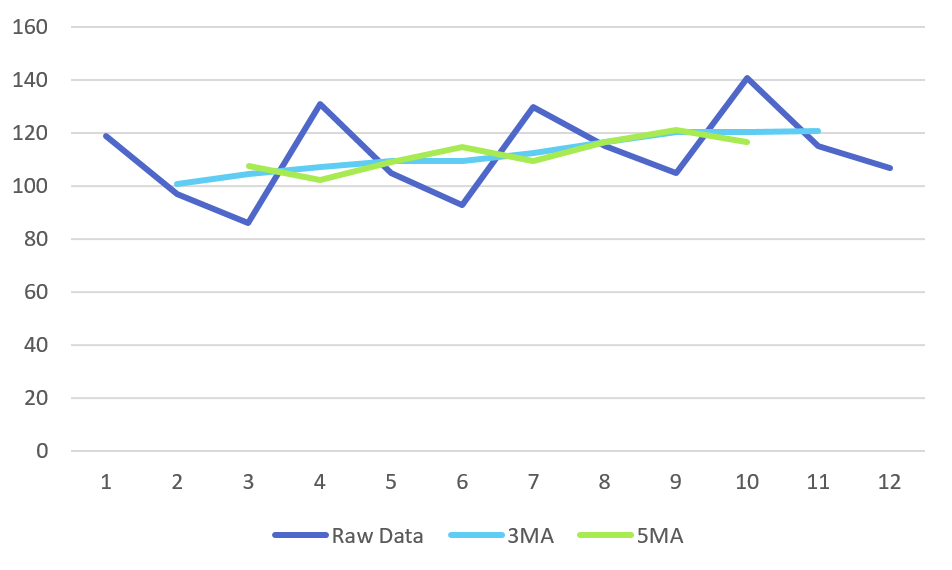 We can see the 3MA is a far more smooth line graph when compared with the 5MA line graph, which still appears to have some degree of seasonality with its peaks and troughs.

If we look at the raw data graph and count the data points from one peak to the next peak, we can see this data has $3$3 points per cycle. If there are $3$3 points per cycle, then a 3MA will be the best moving average to use to smooth or deseasonalise the data–this is because a 3MA will account for each of the three seasons present in the data.

The moving average used should always match the number of seasons per cycle in the original data.

Calculating an even moving average

Calculating an even centred moving average

By taking a half of the first and the last data point, this counts as only one data point and effectively we have only used $4$4.

Some raw data is observed over four quarters for three years. Calculate the missing values of $x$x and $y$y.

Think: Notice that because the data has been collected each quarter we have $4$4 data points per cycle, so it makes sense that best moving average to use to smooth the data will be a $4$4 point moving average.

Do: So to calculate $x$x in the table:

To calculate $y$y, a raw data value, we'll have to work backwards from the 4CMA for June 2014 to calculate it.

Take a look at the graph of the raw data and the moving average to see how smooth the data has become. It almost looks like a perfect straight line. 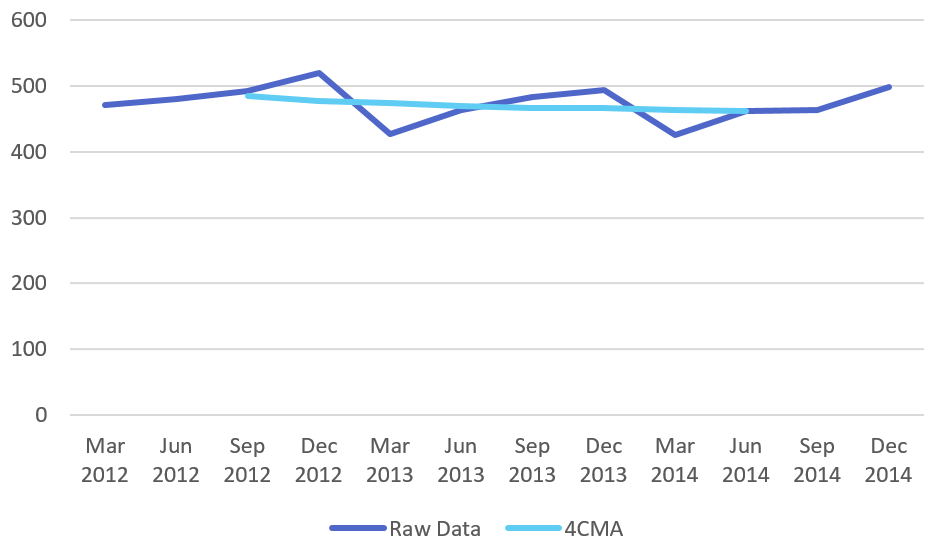 Consider the Time Series graph drawn below, along with two sets of moving averages. 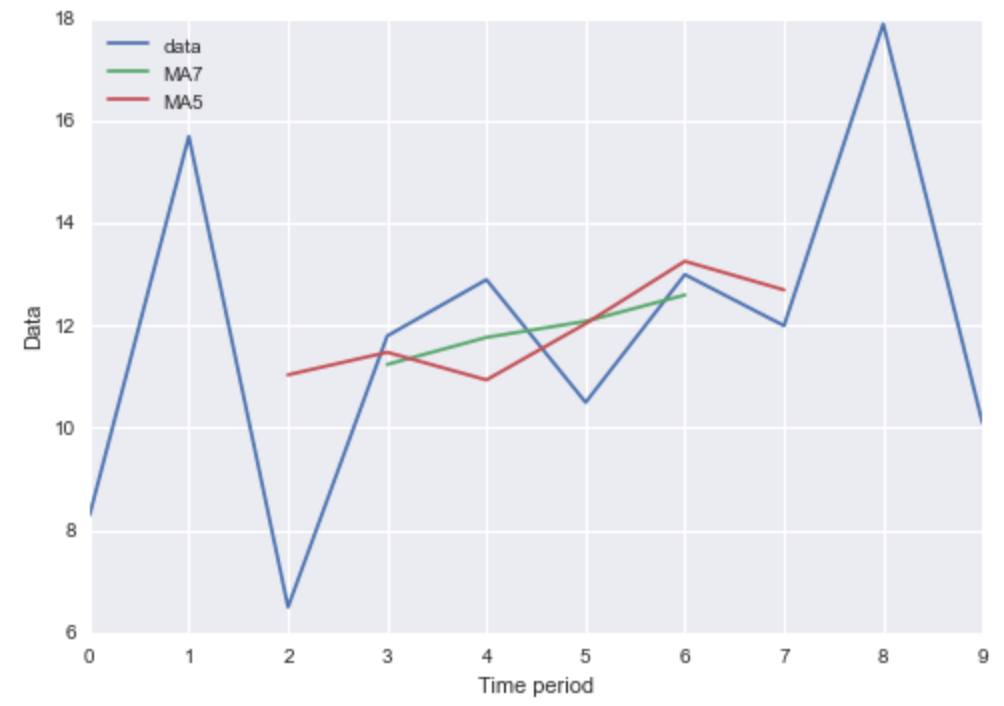 Consider the time series data presented in the table.

Spreadsheets are a powerful tool for calculating moving averages and graphing both the original and smoothed data sets.

Follow the instructions to calculate a 3MA for the data below using a spreadsheet and then use your spreadsheet to graph both the original data and the smoothed data.

Note: The instructions shown use a particular spreadsheet software, the notation and behaviour of your spreadsheet may differ slightly from what is presented if you are using a different program. If in doubt, ask your teacher!

Step 1: Use the first row to enter titles for the columns - Time for column A,  Cost for column B and 3MA for column C. Then enter the time and cost data in their appropriate columns. 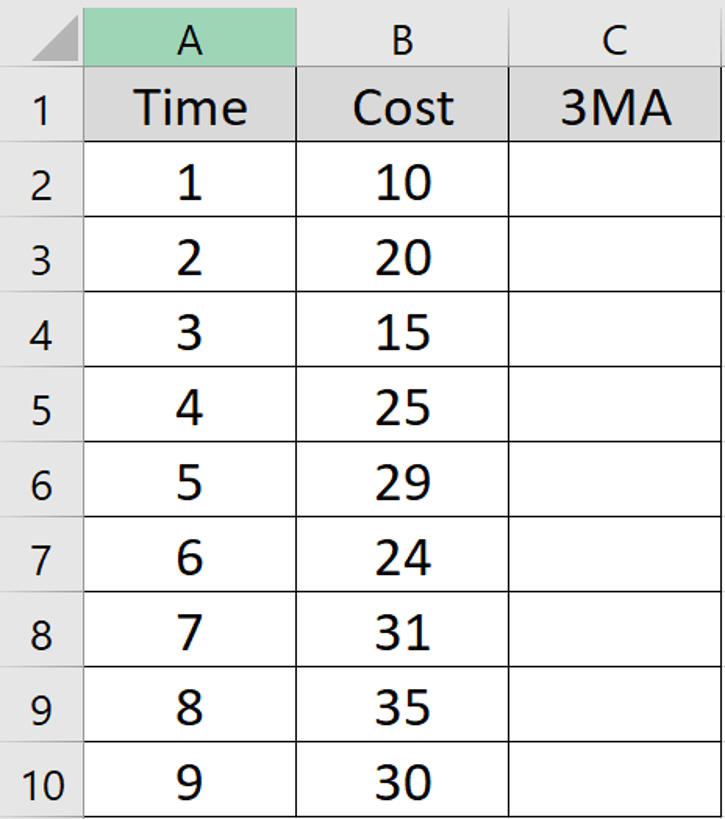 Step 2: Enter the formula for the moving average into Column C. 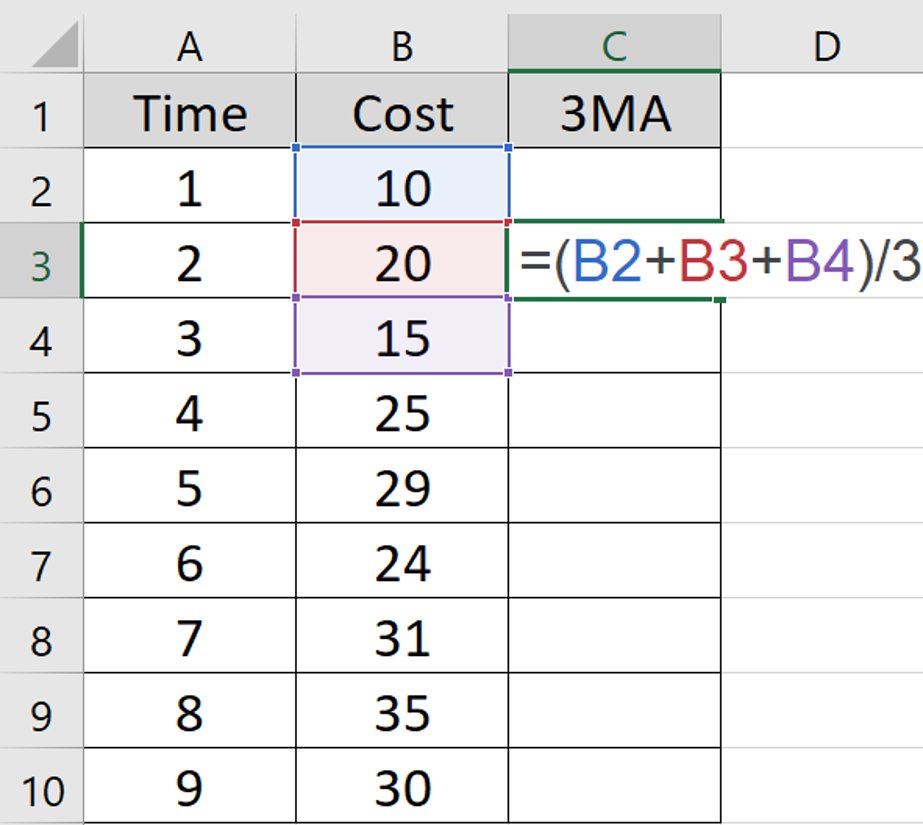 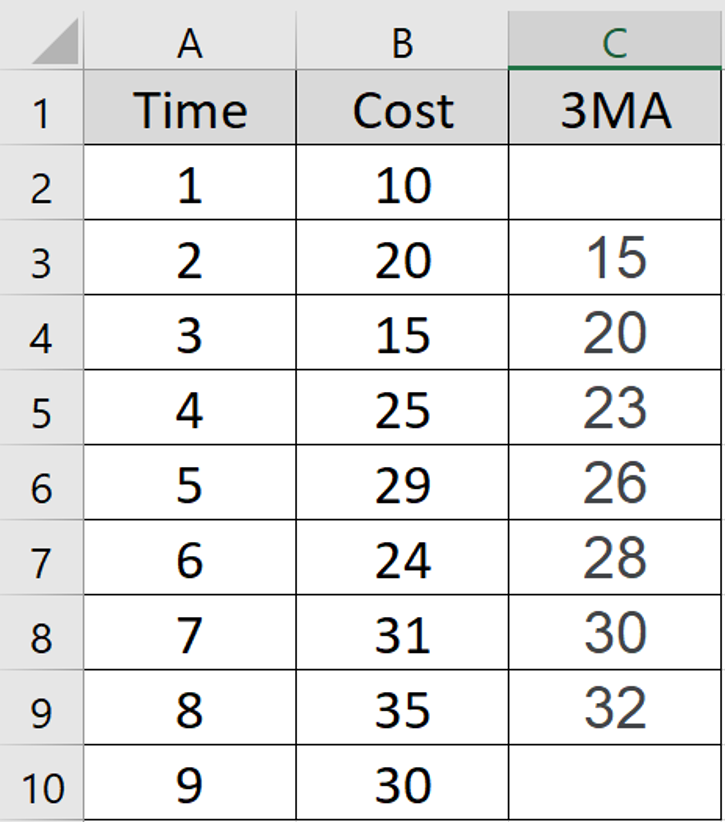 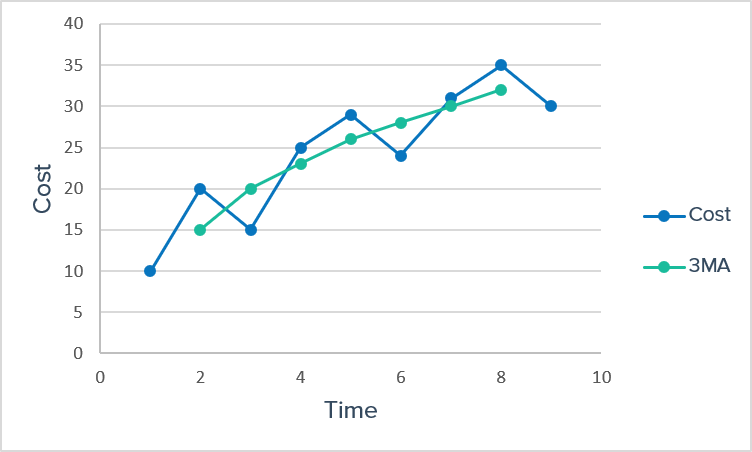 These calculations can also be performed in the spreadsheet application of a CAS. Select your brand below to see instructions for calculating and graphing moving averages.

Justin weighs himself every $4$4 months and plots his weight on the graph below.

smooth time series data by using a simple moving average, including the use of spreadsheets to implement this process