What do roads, human ancestry, currency exchange, planning a wedding, and the internet have in common? They can all be represented with a mathematical object called a graph.

The roads and towns in this map form a graph.

The components and wiring in this electronic circuit are represented as a graph.

In mathematics, the term graph refers to a diagram that consists of a set of points, called vertices, that are connected by a set of lines called edges. When we are using graphs for practical applications, we often use the term network to mean the same thing.

Studying graphs allows us to gain insights into any system of objects, people, places or ideas that have connections between them.

You have seen graphs before, all around you! We are now going to learn how to recognise them, represent them in a consistent way, then analyse them. But first, we need to start with the language of graphs to introduce the key concepts.

This subject is well known for using many different words to refer to the same thing. This reflects the rich history of the subject, and its accessibility - graphs and networks have been studied by people all over the world in many different ways, and nobody agrees on a standard way to talk about them.

The concepts are the most important thing to remember, much more than the name that we give it. We have included some alternate terminology alongside the terms that we will use.

A vertex (or node) is the fundamental building block of a graph and represents a single object or idea. It is drawn as a dot or circle. The plural of vertex is vertices.

An edge is a line segment that begins and ends at a vertex. An edge represents a relationship between the objects or ideas that it links together, and the kind of relationship depends on the context.

On the left is a single vertex. On the right are two vertices with one edge between them.

An edge must be drawn between exactly two vertices. Neither of these are valid edges:

A graph is a collection of vertices with edges drawn between them.

Let’s take a moment and notice a few things about the graphs above:

Here are three more graphs - these have letters or words for each vertex:

Vertices in graphs are often given labels. The labels can be something specific such as the name of a person, city, or animal or it can be more abstract, like a capital letter. In the graphs above, the first one has capital letters $A$A, $B$B, $C$C, $D$D and $E$E for labels, which is useful for pointing out a particular vertex to someone else. The other two graphs have labels that tell us what is being represented.

The first graph has a directed edge because sharks eat fish and not the other way around - a one-way relationship.

The second graph has an undirected edge because France and Spain share a border - a two-way relationship.

A graph that is shown with edges that are a mix of arrows and lines is still a directed graph, where the lines represent a two-way connection. "Mixed" graphs like this are not common. It makes things easier if either all of the edges are lines, or all of the edges are arrows. We can redraw such a graph by replacing two-way edges with a pair of directed edges. An example is shown below:

We have seen that the edges of a graph can be given numerical values like the graph below:

These values are called weights and can represent some property such as distance or cost. When the edges of a graph have weights we refer to the graph as a weighted graph. The weight of the graph is the sum of the weights of all edges.

An edge that starts and ends at the same vertex is called a loop. 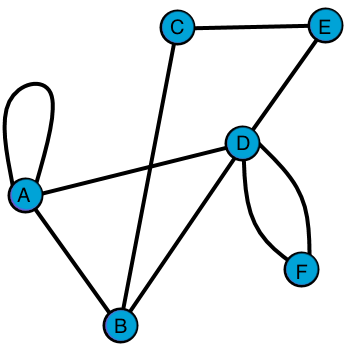 This graph has a loop at vertex $A$A and multiple edges between vertices $D$D and $F$F.

If we can remove a single edge such that the graph is broken into two pieces, then we call that edge a bridge.

The three orange edges are bridges.

Deleting any bridge will break the graph into two parts, with no connection between the parts. If any other edge is deleted, the graph will remain in a single piece.

Degree of a vertex

The degree of a vertex is the number of edges that either go into or out of a vertex, where loops are counted twice. This number tells us how many ways we can move from that vertex to another (or even the same) vertex within the graph.

A useful trick is to make a ring close around the vertex. Count the number of times that edges cross the ring at a vertex, and we will have the degree.

Each vertex has a small ring placed around it and the number of crossings is counted.

If you do it this way you’ll always remember to count loops twice.

If the degree of a vertex is zero, then there are no edges connected to it (not even a loop), and it is called an isolated vertex.

We have already discussed some terms that describe different properties of graphs and we have considered directed, undirected and weighted graphs.

This graph is undirected and weighted.

This is a directed weighted graph.

Here we will see some other ways to classify graphs.

A graph is connected when no vertices or group of vertices are isolated from the rest of the graph. When a part of the graph is isolated, it is said to be disconnected.

The top two graphs are connected, the bottom two are disconnected.

If we remove a bridge from a connected graph the graph will become disconnected.

We call a graph on $n$n vertices complete if every vertex is connected to every other vertex. There is exactly one complete graph for each value of $n$n.

The degree of each individual vertex is equal to one less than the number of vertices overall. In other words, if you take $n$n vertices and connect one to all the others, you draw $n-1$n−1 edges from each vertex.

A graph is called a simple graph if it has:

If we take a graph and delete some edges, or some of its vertices (and all edges connected to it), we obtain a subgraph of the original.

For example, any simple graph that has $n$n vertices is a subgraph of the complete graph with $n$n vertices - we can just add or delete edges to get from one to the other:

The graph on the left has the red edges added in, and then the vertices moved a little.

We end up with a complete graph.

A bipartite graph is a graph whose vertices can be divided into $2$2 groups such that each edge connects a vertex from one group to a vertex in another.  Vertices in a group are never connected to other vertices in that group.

You can see the two groups of vertices (top and bottom) and how each edge joins a node from the top group to the bottom group.

A bipartite graph does not have to be drawn in with the groups of vertices arranged in rows (although they usually are). 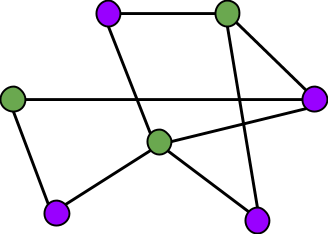 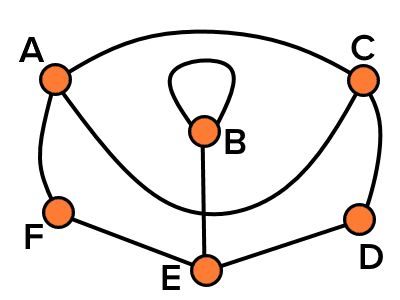 In a connected graph:

Which of the highlighted edges in the network is a bridge? 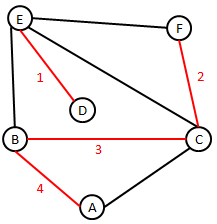 Which of the following graphs are complete bipartite graphs?

Select all that apply.