One of the main advantages of being able to prove things is that we can then use what we have proved to prove something else. By starting from some basic information, we can often follow a chain of proofs to discover complex and interesting properties that we would never have seen before.

The same applies if we can prove two triangles are similar, except instead of equal sides we get sides in a common ratio.

In particular, knowing which angles are equal can help us find relationships between the lines that the angles lie between, since there are many line properties relating to equal angles.

In the diagram below, $XZ=WY$XZ=WY.

Do: Using the information we are given, we can prove that:

With these three facts, we have established enough to prove that:

(SAS: Two pairs of corresponding sides and the pair of included angles are equal)

Since we have proved that the two triangles are congruent, we now know for certain that:

Since these two angles are equal, we can finally prove that:

Reflect: We started by considering what else we would know about the diagram if we knew what we were trying to prove. We then found a different way to find that information, allowing us to prove what we wanted to. 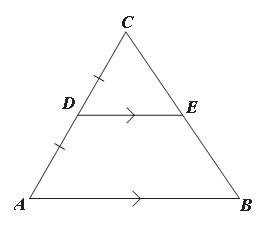