When we have a 2D shape, the amount of space it takes up is the area of that shape. This area is measured by comparing the shape to a square of fixed size. Thus the standard units for area are square units with familiar side lengths.

From smallest to largest the common units used for measuring area are:

Just as with lengths, while we can use any of these units to measure an area, it makes the most sense to use a unit that makes the measurement easy to visualise. To be able to visualise and estimate areas, it can be useful to identify common objects that are about the area of these units. For example:

It is most appropriate to use square metres (m2) to measure the area of:

It is most appropriate to use square centimetres (cm2) to measure the area of:

Sometimes, it might occur that two different units of measurement are appropriate. In that case, you can choose either unit to use.

The area of some leaves, for example, could be measured with either mm2 or cm2.

Sometimes we may only want an idea of the area of something, without needing an exact measurement. In such a case there are some techniques we can use to estimate area:

Estimate the area of the artwork above the sofa if the sofa is $1.9$1.9m in length.

Estimate the area of the curved shape below if each square on the grid has an area of $3$3 mm2. 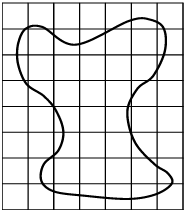 Which of these objects do you think would have an area of about $1$1m2?

The conversion factors between the different area units are:

When converting between units of area:

Area conversions (square the numbers above):

Select the option that shows $3$3 m2 converted into cm2.

Other units of area

Just as with length there are other units of area that were traditionally used and some are still in use today in a few countries or used for particular applications.

For large areas of land such as farms or national parks the unit hectares (ha) is sometimes used. This is actually a metric unit, with $1$1 hectare being equivalent to $10000$10000 m2.

An imperial unit used for large areas of land is acres (ac), which is $\frac{1}{640}$1640​ square miles or approximately $0.4$0.4 hectares. The imperial units we encountered in lengths, which were inches, feet, and miles, can all be used to form units for area - square inches (in2), square feet (ft2), and square miles (mi2). If given the conversion factor, we can convert between units that we are less familiar with, such as these imperial units.

Think: When converting unfamiliar units it is a good idea to set up the given equivalence as an equation and then use operations, keeping the equation balanced, to find the required amount.

choose and use appropriate metric units of area, their abbreviations and conversions between them

estimate the areas of different shapes

convert between metric units of area and other area units